A wall control is both a good thing and a bad thing. Let us explain that a bit. So, a wall control right off the bat is not as convenient as an actual ceiling fan remote. This is of course because you need to get up in order to operate a wall control. A remote is more convenient because you can change the fan speeds and light settings from anywhere in the room. With that being said, a wall control may be more reliable than a remote. A wall control does not need batteries. It cannot be lost or broken as easily as a remote. So, with anything in life, there is both pros and cons of using a Hunter Fan Wall Control. 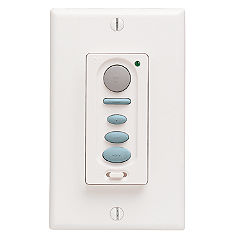 This product has not gotten the best of reviews. One user stated the light came on in the middle of the night all the time – we wonder if perhaps they wired it wrong? Another user stated the switch is not CFL compatible.

Another user as well stated that they installed 2 of these switches and one of them comes on all by itself – so maybe the other user didn’t wire it wrong, since more than one user reported the same problem. 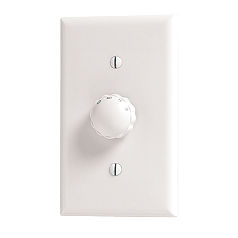 Installs in a standard two-wire wall switch. Will operate three speeds (low, medium, high). Only one review from one user stating that they bought 5 of these for a home they renovated. They stated this is the best switch for a Hunter fan that they have seen. 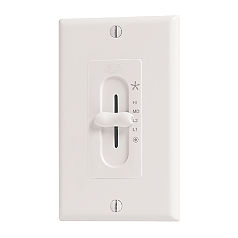 Operates four fan speeds. Users stated that the knob breaks easily under gentle usage and design is poor. Another user stated they purchased 15 of these for a project. One arrived damaged and two more got damaged and broken during the move in. The user stated that Hunter is not providing warranty support on these and the user was quite upset.